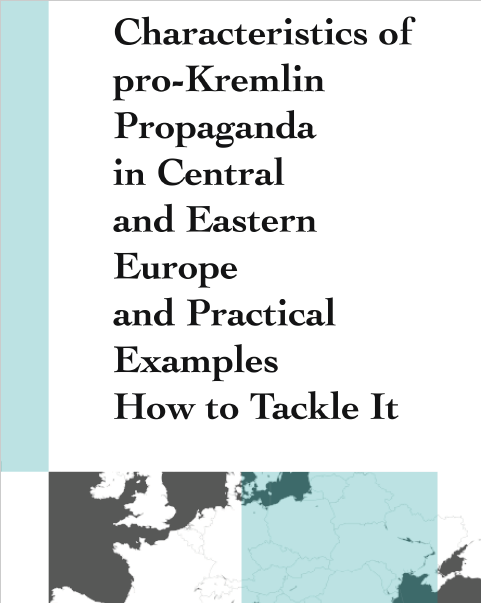 Pro-Kremlin propaganda has become one of the highly discussed topics in past few years, especially in connection with a spread of disinformation and an information war which is classified as a part of so-called “soft power” or “hybrid war”. The phenomenon of propaganda is not new, but it became more apparent currently how powerful well targeted propaganda can be using means such as TV broadcasting, internet or new media; how quickly and effectively it is able to shape and affect politics as well as public opinion. Contributors of this volume agree that the extent of the pro-Kremlin propaganda and its impact made itself more visible during the Ukraine crisis. But almost every commentator mentioned an imminent experience with the propaganda in their own countries which show the range and effect of the phenomena.
Therefore, Nesehnutí took the opportunity to gather contributions of experts on the subject of pro-Kremlin propaganda and its activities in the regions of Central and Eastern Europe, namely from Czech Republic, Slovakia, Moldova, Transnistria, Poland, Hungary and Ukraine. The aim was not only to repeat that there is propaganda supported if not organised by Kremlin, but to compare what tools the propaganda uses in different countries, what topics it focuses on, and most importantly to describe what steps are taken to address it in abovementioned countries in Europe. What do states, non-governmental organizations and, possibly, individuals do and can do facing the propaganda and what proved to be effective.
For this reason, the more practical and comparative approach was chosen. The presented texts imply that the pro-Kremlin propaganda has similar features in all considered countries. Although it is obvious that the narrative differs according to a given country or region, the used tools are very similar; disinformation websites, often with a vague ownership structure and anonymous authors, fake news and disinformation spread through social media, the use of trolls to influence public opinion etc. However, the texts were able to present also some effective measures to challenge the propaganda, in some cases direct state actions, but especially a significant reaction that came from the public, non-governmental organizations, independent journalists, academics and in some cases even private figures. All these examples can spark a little optimism in the fight with the propaganda and serve as a lesson of which measures can be taken.
Download the publication: Characteristics of pro-Kremlin Propaganda in Central and Eastern Europe and Practical Examples How to Tackle It